Jeff_Hanneman Posts: 12 ✭
May 3 in General Discussion
On top of the HRA and OLA discussions, I've decided to crunch some data for braking performance. I hope you enjoy.

We all tend to class out cars on the way the accelerate and on the way they grip. But there’s little discussion on how a car brakes. And, in real life (mostly in competition, of course) it is a critical measure of a vehicle’s performance.

Reality is clear and stubborn. If a car accelerates and corners identically to other but has a braking advantage, it will be faster around a circuit. It will allow it to brake at a later point, and therefore, carry higher speed just before the curve.

But, how does Top Drives approach this? Are there really differences in between different cars, and how may this impact its performance? Let’s see it.

How to measure it

Normally, there are two methods to measure braking: one is braking distance and the other one is deceleration.

Below there’s a table (source: km77.com) of braking distances in several production vehicles. 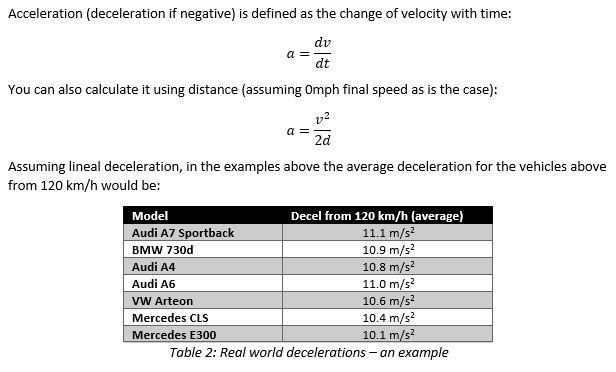 What are the figures we can see in Top Drives? We are going to use the same metric (deceleration in m/s2) to compare results with real world.

First, we need some data points. For that, I’ve used measurements from 0-100mph (Midlands 5) and from 0-100-0 mph (Midlands 7). It is obvious that deceleration time would be

One assumption, a fair one, is that there’s no reaction time by the driver – as soon as the vehicle hits 100mph, brakes are applied to max pressure with no latency.

With that, a nice table can be created with some sample points 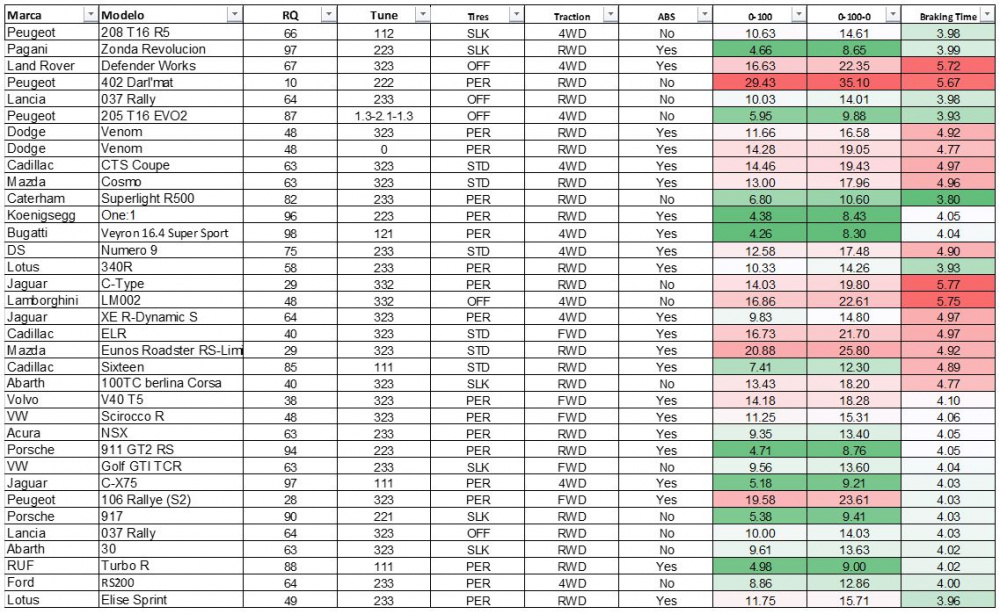 And then of course some deceleration figures can be extracted 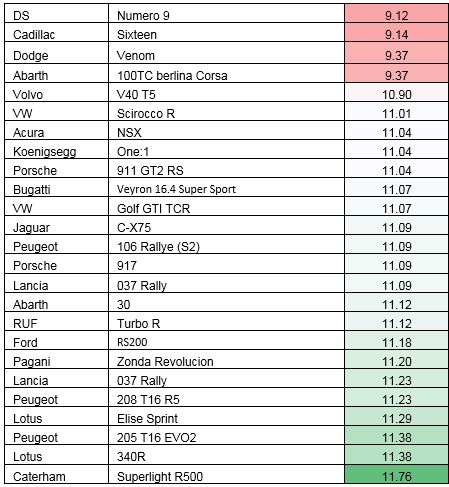 This can be better visualized in a graphic:

Figure 1: It is clear there are three main braking profiles

This can be observed if results are grouped by tire type:

Figure 3: Deceleration for All Surface tires

This kind of makes sense with regards to vehicles equipped with performance tires – i.e. achieving a decel of ca. 11 m/s2 is normal. However, I would have expected a much better behaviour from competition vehicles with slick tires vs “normal” vehicles with performance tires (e.g., the Zonda Revolucion there’s no way it would brake less than a Lotus Elise Sprint), and I would have expected standard tire vehicles to brake significantly better than they do here – check the real world example of the VW Arteon, with over 11 m/s2, whereas here would be flirting with the 9 m/s2 as the rest of the standards.

What can additionally be observed is that:

There are however more interesting facts:

Figure 7: This does not make sense. Why maxing a car worsens its braking behaviour?

Figure 8: Comparison in between different tunes in the same vehicle

And, what happens in the wet? Yes, I’ve done some calculations too 😊

I’ve used Midlands 6 and 8 for this, with the same methodology. These are the results:

And these the deceleration figures 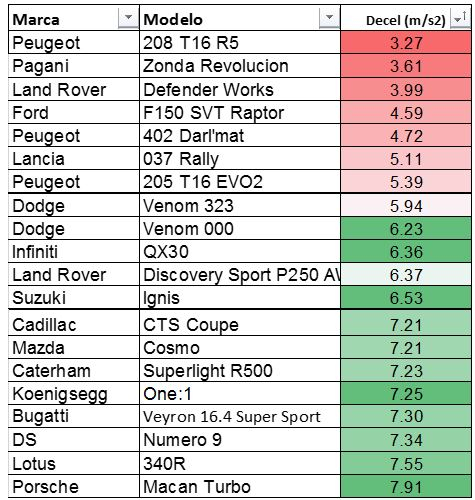 Table 6: Deceleration figures in the wet

And again, represented in a graphic: 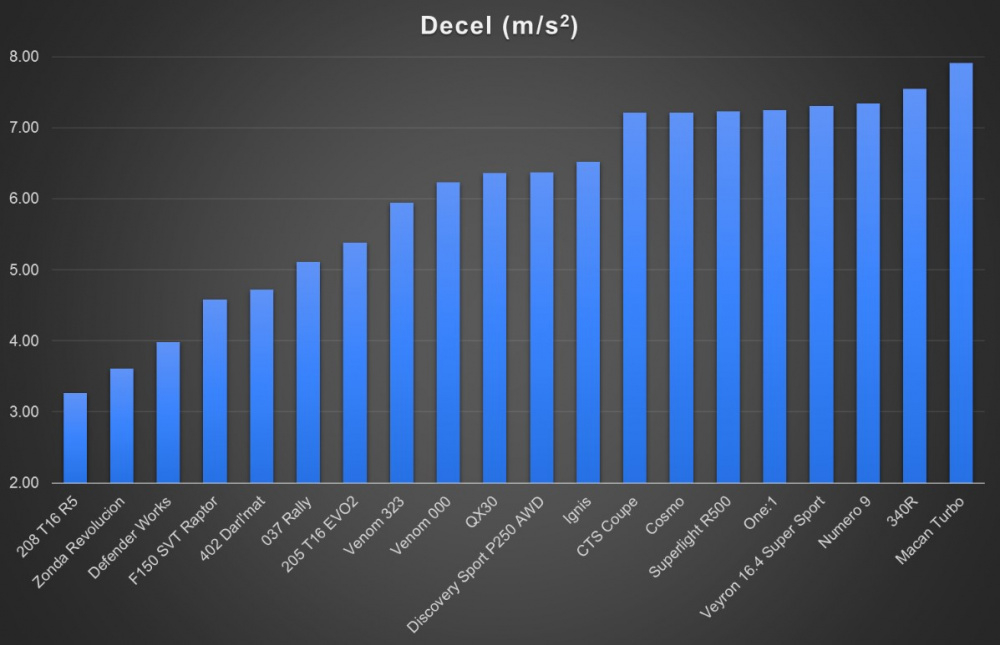 Figure 9: Some cars see big degradation in braking distance in the wet!

What we can extract from here is:

We can even assess how performance is degraded for some vehicles: 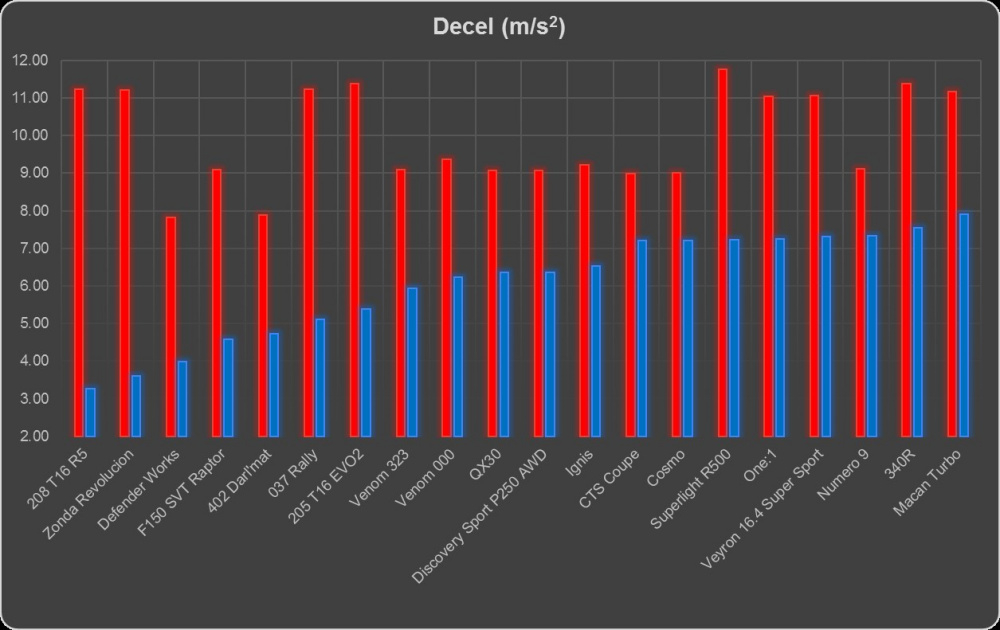 Figure 10: Look at what happens to the 208 – from being one of the best in the dry to be a complete disaster in the wet

And finally, we can extrapolate some degradation percentages 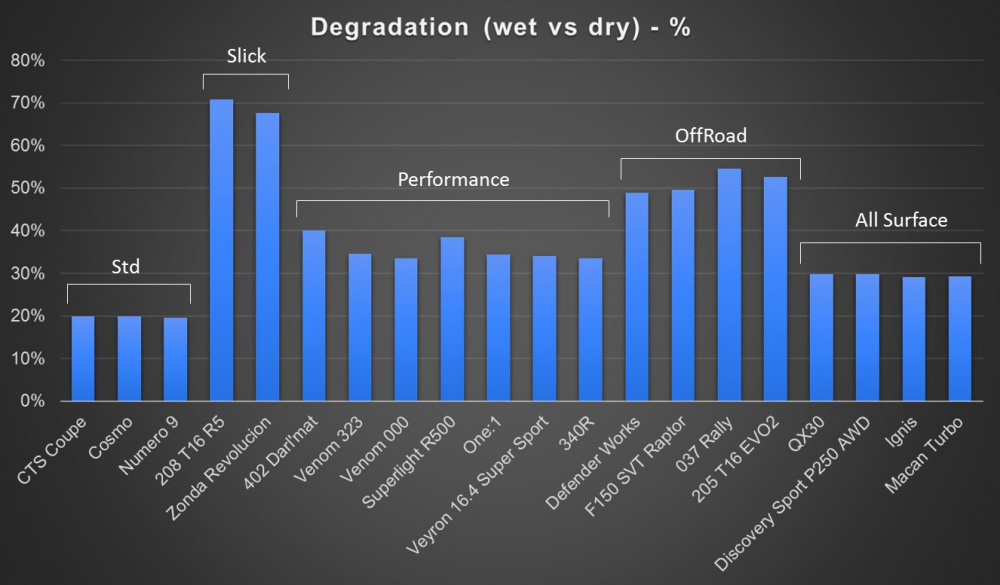 Figure 11: We can see some pattern in here with regards to tire mount, can’t we?

What does this graphic mean? It means that in the case of some cars with Std tires (Cadillac CTS, Mazda Cosmo and DS Numero 9), braking performance is only reduced 20% in the wet. In cars with slicks such as the 208 T16 R5 or the Zonda Revolucion, degradation is ca. 70%.

What can we learn from all of this?

In general, I think vehicles are grouped in categories instead of applying specific braking behaviours. i.e., whilst each vehicle has its own profile for acceleration, looks like braking performance fits into one category and sticks with it. We do not play Top Drives as per its real-world simulation correlation, but it is worth noting this – and Hutch has all this data through EVO! 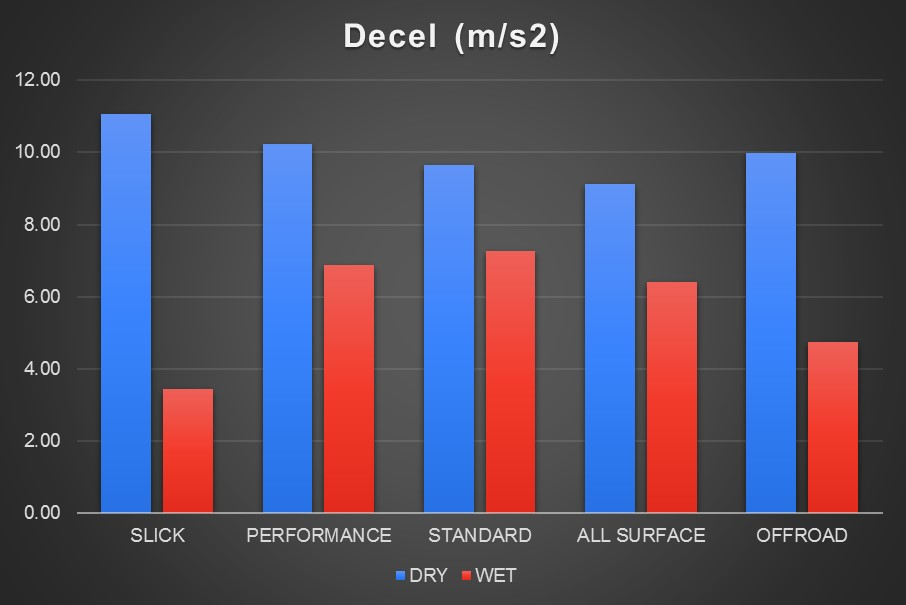 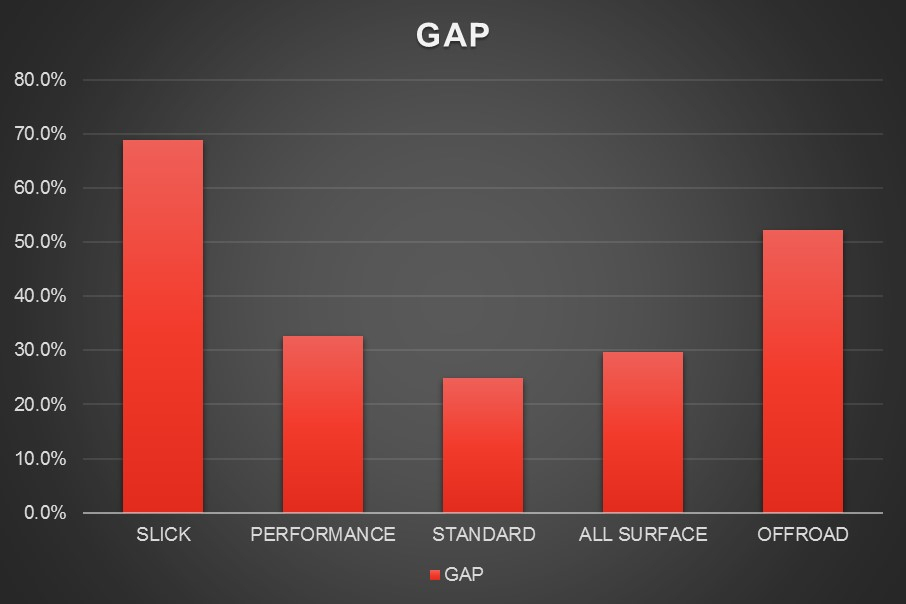 Figure 13: Average deceleration degradation in the wet depending on tire mount

Thanks for reading through this – I hope this is useful to some, and more than happy to support with questions.

Challenge --> can you find the best braking cars? So far, what I found is the Caterham Superlight R500 in the dry and the Macan Turbo in the wet.

And finally, to @hutch, I hope you can appreciate the work that has gone into this. I’d love to expand it, but I’d need a deeper garage. A free choice of 5 legendaries would be really nice from you and would encourage me to keep doing this kind of work 😊